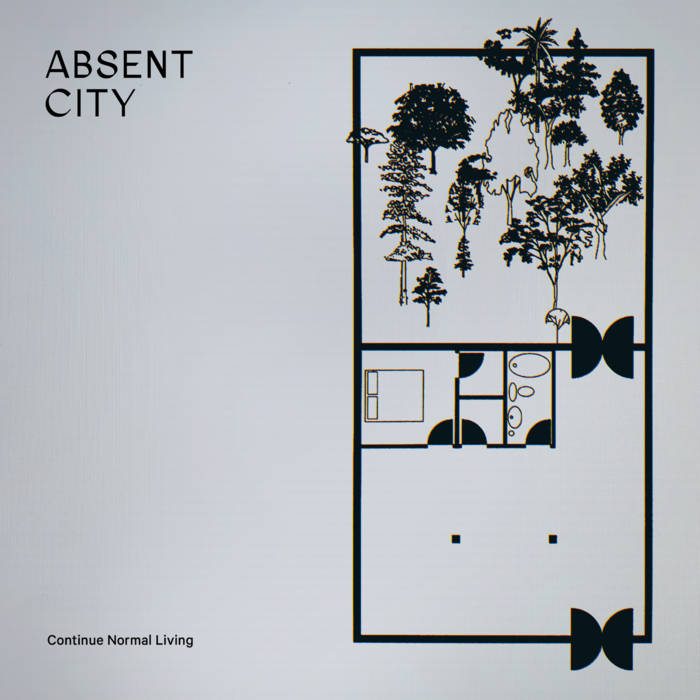 Josh Katzenmeyer Thoughtfully composed and dynamic tunes with a lot to catch on repeated listens. The mid-tempo, dreamy sound also makes it a great record to fall asleep to. I see many summer nights listening to this one. Favorite track: Beam of Light.

notjamesbrandt An album that gets better with every listen. Favorite track: Inner World.

Absent City’s debut full-length, Continue Normal Living, is an album of tender dreams and precarious schemes. In glimmering, intricate guitar pop that brings to mind Yo La Tengo, Luna, the Clientele, Electrelane, or the Go-Betweens, the record reveals itself to be many things at once: prophecy and lament, declaration of hope and survey of self-limitation, a course toward an inscrutable future and a spotty odyssey of unexpected return.

In 2014, following the fracture of his Brooklyn dream pop band, Tiger Dare, Bay Area native Henry Freedland found himself generally wrecked: working an impossible job, romantically marooned, isolated by anxious inaction. But late at night in his tiny apartment, he kept writing music that sought answers amid chaos. Songs about fighting anhedonia and dizzying insomnia and financial despair and a sense of abject failure. About imposter syndrome (“for years I’ve tried / to feel normal in their eyes / so I’ll fake it fine tonight,” in “Beam of Light”) and a heartsick experience of a cruelly inequitable world (“the terms of love / with the lands I’m of / have torn apart,” per “Solid Ground”).

Soon Freedland joined with drummer Liz Maynes-Aminzade and bassist Sam Bloch to realize these songs and more as Absent City. Life’s promises slowly fell into repair, too—he fell in love, got engaged—bringing an uplift to the scene, a refound sense of wonder and possibility.

In 2018, the band began recording at Brooklyn’s Four Foot Studios with Tiger Dare engineer and producer Gabriel Galvin, a maestro of warm atmospherics. Late-night session by session, the album emerged, as Maynes-Aminzade’s expressive percussion and Bloch’s scooping bass lines shored up interwoven layers of dreamy guitars and lush arrangements full of organ, strings, woodwinds, and more. With Galvin at the helm, the songs took dynamic form—building and retracting and then building back again twice as strong, earning their roiling bridges, bounding solos, and outros of thundering, grand release.

Then, as recording sessions neared completion, life again began leading Freedland to new places. He and his wife found out they were expecting their first child. They began planning to move back westward, to Oakland. And all of a sudden, it became clear this was the story the record had been foretelling all along. Notice had been lying in wait on songs of imagined plans, frantic escapes, journeys from city to fields of green—on the woozy, half-speed, surf-at-night anthem “California Afternoons.” “I’ve been searching for a future me,” Freedland sings on that track, “he’s been dreaming of his past with you.”

So it’s only fitting that Continue Normal Living should be the first release of new Bay Area collective label Homing Instinct Records. It is, after all, an album that gives the sense of somehow being nostalgic for tomorrow, a record of putting the pieces back together and finding they were more than they seemed—a new old endeavor from a strange familiar place.

Bandcamp Daily  your guide to the world of Bandcamp

Featured sounds by K.Spark and WIZDUMB, plus Basi joins the show to discuss his latest release.